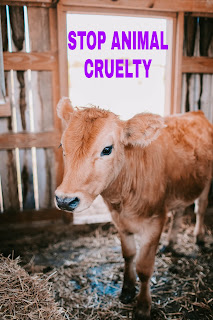 Over the past few years, concern and awareness regarding animal cruelty has been increasing. We now, more than ever, understand that animals are intelligent and emotional beings, with rich social lives. They are capable of feeling love, care, empathy, joy, pain, fear, distress, and terror, similar to you and me. That is why there has been a growing movement to end animal cruelty.
Animal cruelty has taken on many forms. Whether it be for sport, consumption, or religious ritualistic ceremonies, the theme is the same: complete disregard for the pain and suffering these innocent creatures endure. Any book that purports itself to be a moral guide for humanity should, by all means, condemn the practice of animal cruelty. Instead, in the bible, we find that animal cruelty is glorified. The first instance of animal cruelty that we see in the bible is found in Genesis chapter 4, verse 4. The New International Version reads: "And Abel also brought an offering, fat portions from some of the firstborn of his flock. The Lord looked with favor on Abel and his offering,". Apparently, the God of the bible couldn't help but feel giddy and overjoyed when Abel killed and burned a sheep in his honor.
This ritualistic practice of slaughtering animals for the purpose of appeasing some supernatural entity is still widely practiced all over the world. Anyone who dismisses the butchering of an animal with a knife should just remember how painful it felt the last time they were cut with some sharp object. Even going to the doctor and getting a shot infuses many people with sheer terror. Imagine how incredibly painful it would be to die being stabbed to death. The terror in their eyes and their cries of pain is sufficient to understand how these animals feel while being slaughtered. Yet, the bible encourages the constant and habitual killing of an animal for religious purposes, as if God was a being who was delighted every time an animal was butchered as an offering to him.
The bible has twisted people's sense of morality and desensitized them when it comes to the treatment of animals by normalizing their slaughtering for religious reasons. This ritualistic practice of killing animals should not have a place in our modern society, and neither should the bible.
-Miguel Gonzalez
References: https://cosmicskeptic.com/2019/07/13/iamvegan/