SUGAR DADDIES IN THE BIBLE: BOAZ 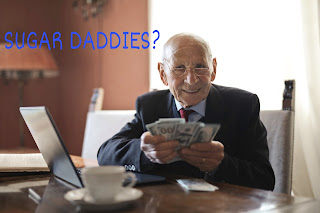 The bible book of Ruth has been portrayed for centuries as a wonderful story of the love and loyalty that Ruth had for her mother-in-law, Naomi. But, what they don't tell you is that it is also a story of what is commonly known as "sugaring". Sugaring is a practice wherein a "sugar baby" receives financial support and material benefits from a "sugar daddy" in exchange for companionship and, oftentimes, sex. The sugar baby is usually a young woman, and the sugar daddy a well-off older man.
I would like to rename the bible book of Ruth to "Boaz: The Sugar Daddy". Why? Because that is essentially what this section of the bible really is about- a young woman in need receives financial assistance from a rich, older man. In exchange, the wealthy older man gets companionship and sex.
On the surface, the bible book of Ruth tells the story of the unbreakable friendship between Ruth and Naomi. Naomi is a Jewish woman who, because of a famine, leaves her home country and settles in Moab with her husband and two sons. Eventually, both her sons marry Moabite women, one of them named Ruth. During the course of ten years, the story goes, Naomi's husband and two sons die, leaving her and her daughters-in-law widowed. Naomi hears that the famine in Israel is over, so she decides to go back. After insisting to her daughters-in-law that they stay in Moab and find husbands, Ruth makes the decision to leave her country and go live in Israel with Naomi.
In those times, women were not allowed to hold property or get jobs, leaving Naomi and Ruth poor and destitute. Boaz, an elderly rich man, capitalizes on their desperate situation and offers the much younger Ruth financial security...with the condition that she be his wife. Boaz marries Ruth, becomes her provider and benefactor, enjoys her youth and vitality, and Ruth receives financial security. Essentially, turning this relationship into the sugar baby/sugar daddy arrangement. God, according to the story, looks favorably upon this arrangement and "blesses" them.
Why God, who supposedly is fair and just, would bless an arrangement that wholly disempowers a woman and makes her completely dependent on a man, is baffling. Of course, it is not baffling at all if we consider that there is a simple explanation- the bible was written in a sexist and male dominated time where women were second-class citizens unworthy of even holding a job or property. No wonder the story says that God blesses this arrangement, because, in reality, God didn't bless this arrangement at all. It was the author of the book of Ruth who blesses this arrangement. Why? Because obviously the writer of the book of Ruth is a sexist misogynist man who believes that women are second-class citizens unworthy of holding a job or property.
The bible book of Ruth is a male egotistical story that only serves to denigrate women and glorify an era where women had no rights. The only thing the book of Ruth is good for is to rip out its pages and use them as fodder for a bonfire on a cold night. In fact, I think I might do that.
-Miguel Gonzalez
For similar articles:
https://www.thebiblecritic.com/2020/08/god-performs-first-arranged-marriage.html?m=1
https://www.thebiblecritic.com/2020/08/and-worst-verse-in-bible-is.html?m=1