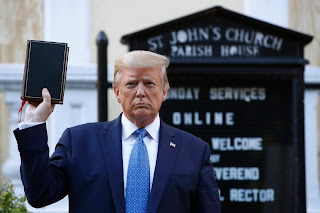 YES, IT WAS! IT REALLY WAS!
Are you surprised at my answer? Did you expect me to cry and moan over how inappropriate the photo shoot was? Well, sorry to disappoint you. There are many other people doing that for me already. But, as someone who has studied the bible throughout his entire life, I can tell you with certainty that Trump posing with the bible in his hand is very fitting.
You see, the bible and Trump share plenty of similarities...and some of those parts of the bible fit in nicely with Trump like a horse and carriage. Of course, many would disagree with me, but, lets take a look at some of those similarities so you can see my point.
Misogyny
Trump- A 2005 Access Hollywood has Trump on record saying "...when you're a star, they let you do it. You can do anything. Grab 'em by the pussy. You can do anything."
Bible- Numbers chapter 31 tells us how Moses, a man "personally chosen" by God, has an axe to grind with the Midianites (inhabitants of Midian). So in verse 12 Moses tells the people "Arm some of your men to go to war against the Midianites so that they may carry out the Lord's vengeance on them." Then in verses 17 and 18 he goes on to say "And kill every woman who has slept with a man, but save for yourselves every girl who has never slept with a man.
Apparently, both Trump and the bible endorse doing "anything" to women.
Racism
Trump- Trump kicked off his 2016 presidential campaign with a rant against Mexican immigrants. On June 16, 2015 he said these words to a mesmerized audience: "When Mexico sends its people...They're sending people that have lots of problems, and they're bringing those problems with us. They're bringing drugs. They're bringing crime. They're rapists." A person who makes such sweeping generalizations about any race is definitely a racist.
Bible- Matthew chapter 15 verse 21 tells us an incident where a non-Jewish woman begs Jesus to help her daughter, who seems to be suffering from some kind of affliction. But, Jesus ignores her and just keeps walking along. Because the woman would not give up, Jesus' disciples urge  him to send the woman away. In response, Jesus says in verse 24: "I was sent only to the lost sheep of Israel." Not one to give up easily, the Canaanite woman kneels before Jesus and continues to beg for his help. "It is not right to take the children's bread and toss it to the dogs", replies Jesus in verse 26. In this metaphor, the children are the Jews and the dogs are the Canaanite people. Its true folks, Jesus compared non-Jews to dogs. It doesn't matter who you are- Jesus,Gandhi, Mother Teresa, or a winner of 20 Nobel peace prizes. You just don't call anyone a dog.
Rejection of science
Trump- Trump's rejection of established science has been well documented. And, it has not gone unnoticed to the scientific community. Just recently, the most regarded magazine in its genre, the Scientific American, stated "The evidence and the science show that Donald Trump has badly damaged the U.S. and its people- because he rejects evidence and science." From promoting quack cures for Covid-19 to rejecting the advice of the nation's top scientists, Trump's disregard for science and evidence knows no boundaries. It's no wonder he sued to hide his college grades.
Bible- This one is easy. I don't even know where to begin. It's fair to say that the bible pretty much rejects science from page one up until the last page. From the cosmos being made in six days to Noah's flood to a man living inside a giant fish for three days (see the bible book of Jonah), it goes without saying that the bible rejects science on every level.
I can go on and on, but you see my point. That's why it doesn't bother me that Donald Trump took a photo with a bible in hand. Maybe I'll dig up my old bible and have Trump autograph it.
-Miguel Gonzalez
P.S. If you like my articles, click the subscribe button to receive notifications whenever a new post comes out.