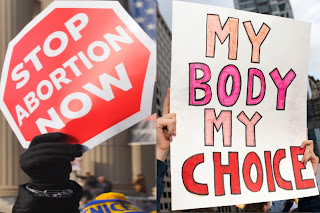 Few words evoke more intense feelings and colliding viewpoints than this word. A presidential candidate's stance on that single matter is enough to sway voters one way or another in an election year and decide the next administration...that is how deep-seated people's views on abortion are. The line in the sand has been drawn and the trenches have been dug, a civil war of ideological views is being fought at this very moment and on many different fronts.

This topic is relevant now more than ever. Seems like our courts are always one step closer to being pro-choice or one judge closer to banning abortion clinics. Many women just stand back and hold their breath...wondering when the chips will fall and a new law or a removal of an existing one will hijack their reproductive systems and strip them of control over their own bodies.

Others, filled with "holy" zeal for "God's word", become giddy with anticipation at any glimmer of hope that a conservative court will ban abortion, or make it much more difficult...a dream come true for them.

Well, the bible's stance on abortion is two-fold and contradictory, and therein lies the paradox. But, first thing first: the bible never mentions the word "abortion". To me, that is just a technicality...it definitely talks about the willful termination of a pregnancy, which is the very definition of abortion. And, it has a lot to say about unborn children.

Let's examine a couple of key bible verses that are commonly used to condemn abortion. Exodus 21:22-24 says "if people are fighting and hit a pregnant woman and she gives birth prematurely but there is no serious injury, the offender must be fined whatever the woman's husband demands and the court allows. But if there is serious injury, you are to take life for life, eye for eye, tooth for tooth, hand for hand, foot for foot,".

These verses say that if people were fighting and in the midst of it a pregnant woman is hurt and she has a miscarriage, the offender has to pay the price...whatever the damage done to the unborn child must be done to the offender. If the unborn child does not survive, the offender has to be put to death, according to God's command in these verses. Based on this passage, people will argue that God considers the life of an unborn child the same as an adult life, and, by extension, that terminating a pregnancy would be wrong.

Another bible verse is Jeremiah 1:5. It says "Before I formed you in the womb I knew you, before you were born I set you apart...". People will also point to this and say that God values a life developing in the womb, making abortion wrong.

Both of these bible verses have their weaknesses and can be debated, but I see how people can use these verses to make a case that the bible is anti-abortion. Problem is, the bible is also pro-abortion, and, according to the bible, it was God himself that setup the first abortion clinic...right inside his holy temple! Also, it was God himself who readily performed the abortions!

We just read a couple of bible verses that, one can say, the essence of them leans more toward the anti-abortion side. But, there are other passages in the bible that, either people are not aware of it, or don't want to talk about it. Its incredible to see the mental gymnastics people will go through just to excuse or deny a bible verse that directly contradicts their beliefs. However, we should let this bible passage stand on its own.

The bible book of Numbers chapter 5, verses 11 through 21, in part say this: "Then the Lord said to Moses, “Speak to the Israelites and say to them: ‘If a man’s wife goes astray and is unfaithful to him so that another man has sexual relations with her, and this is hidden from her husband...then he is to take his wife to the priest...The priest shall bring her and have her stand before the Lord. Then he shall take some holy water in a clay jar and put some dust from the tabernacle floor into the water... Then the priest shall put the woman under oath and say to her, “"If no other man has had sexual relations with you and you have not gone astray and become impure while married to your husband, may this bitter water that brings a curse not harm you. But if you have gone astray while married to your husband and you have made yourself impure by having sexual relations with a man other than your husband”— here the priest is to put the woman under this curse—“may the Lord cause you to become a curse among your people when he makes your womb miscarry and your abdomen swell.'"

I'm going to summarize this passage in a nutshell. God commanded that if a man suspected his wife had been unfaithful and possibly became pregnant, he was to take her to the temple and visit the priest. The priest would gather some dust from the tabernacle floor, mix it with some holy water, and make the woman drink it. If the woman did not have an extramarital affair, then nothing would happen. If she had an affair and was pregnant, then upon drinking that bitter water, God would terminate the pregnancy.

Yes, you read correctly. Here is the exact quote straight from the bible: "may the Lord cause you to become a curse among your people when he makes your womb miscarry". God himself, according to this bible passage, personally terminates the pregnancy. Seems like a double standard to me. On the one hand, like we read in Exodus, God punishes with death a person who accidentally causes the death of a fetus or unborn baby. On the other hand, he personally causes the miscarriage of an unborn child he doesn't want or deems not good enough. Hence, the abortion paradox in the bible. The great contradiction. Need more evidence? This bible passage will seal the deal.

Follow along as we read the bible book of Hosea chapter 13, verses 14 and 15:  "Even though he thrives among his brothers. An east wind from the Lord will come,
blowing in from the desert; his spring will fail and his well dry up. His storehouse will be plundered of all its treasures. The people of Samaria must bear their guilt,
because they have rebelled against their God. They will fall by the sword; their little ones will be dashed to the ground, their pregnant women ripped open.”

Pretty gruesome, right? It was for me. I I took no pleasure in quoting those verses. But, nonetheless, we must go over what we just read. In this bible excerpt, God is displeased with the Samaritans, so he plans to punish them by having "their little ones" "dashed to the ground", and "their pregnant women ripped open". This bible verse shows not only a willingness by the god of the bible to terminate pregnancies for petty reasons, but a disdain and contempt for the Samaritan women's unborn children. And make no mistake, this verse clearly states that it is God who does this. I'm not saying here that the god that you may believe in is capable of doing that, all I'm doing is repeating what the bible says, without sugar-coating it.

The glaring male chauvinism in the bible jumps out from its pages when you consider that the only people making the biblical rules and laws governing women's bodies are MALE bible writers. The bible doesn't give women a voice or a choice when it comes to decisions being made regarding their own bodies.

Misogyny aside, the bible based arguments that support anti-abortion views are half-baked. Like a weakened tree with decaying roots, they topple over easily when the high winds blow. These arguments are weak, and the book used to hold them in place is decayed. Peel back the thinly veiled layer of "holiness" from the bible, and what you get are verses that support and endorse the termination of pregnancies whenever it suits its purpose.

All too often, people only see what they want to see, and show you only what they want you to see. But, you should see for yourself. And let the bible speak for itself. If you do, then you'll hear the terrible message it has to say.