CRIMES AGAINST HUMANITY IN THE OLD TESTAMENT 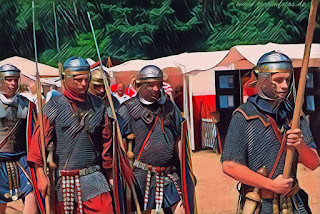 Adolf Hitler. Joseph Stalin. Mao Tse-Tung. These names have become synonymous with mass murder, ethnic cleansing, and genocide. Proof that real-life monsters do exist. Whether it was for political reasons, extreme ideologies, or hatred for other races, these men were responsible for the death of millions upon millions of people in the last century. Hitler and the holocaust. Stalin and The Great Purge. Mao and the Great Leap Forward. Famine, starvation, executions, death camps, imprisonments, the Gulags- these dictators and their henchmen employed a variety of methods to exterminate those they simply did not want around.

I know many of us do not want to revisit these dark times in our modern history, where millions of people reached into the deepest, darkest, most depraved part of their beings and participated in the most heinous of atrocities. Perhaps we don't want to admit that, hidden deep within the psyche of a human being, is the ability to turn into a monster.

Understandably, we recoil and are deeply troubled when we read about these bleak periods in humanity's history. How ironic is it, then, when those that profess belief in the bible aren't the least bit disturbed when they read about the violence and barbarity contained in the Old Testament. From beginning to end, mass murder and genocide are consistent themes that run along like gangrene throughout the body of the Old Testament's pages.

"GO, ATTACK THE AMALEKITES AND TOTALLY DESTROY ALL THAT BELONGS TO THEM"

According to the book of First Samuel of the Old Testament, God had a bone to pick with the Amalekites. The story goes that, during the period of time that the Israelites were wandering about the desert after their exodus from Egypt, the people of Amalek had become hostile to them. They went to war against the Israelites and, with the help of God, the Israelites were able to defeat them. Fast forward 40 years later, and God still held a grudge against the Amalekites. Bear in mind, at that time, there would had been a new generation of Amalekite people, folks who had nothing to do with the decisions of their parents and grandparents. But, that didn't matter to the God of the Old Testament. He still wasn't satisfied that the Amalekites had suffered a humiliating defeat at the hands of the Israelite army. No no, he wanted more blood. He wanted them gone. He wanted them completely wiped off the face of the Earth. So, he gave this order to Saul, king of the Israelites, "I will punish the Amalekites for what they did to Israel when they waylaid them as they came up from Egypt. Now go, attack the Amalekites and totally destroy all that belongs to them. Do not spare them; put to death men and women, children and infants, cattle and sheep, camels and donkeys."- 1 Samuel 15: 2, 3.

Let's break down what God, according to this story,  was asking the Israelites to do. There are several elements of killing in these verses that we need to analyze. First is genocide. God wanted the entire Amalekite race to be wiped out. Second was infanticide. Babies were not to be spared. Third, geronticide. The elderly were ordered to be killed. And lastly, theriocide. Sentient animals were similarly ordered to be done away with.

God was ordering the Israelite army to march into a bustling and lively country and leave it completely decimated and unrecognizable, it's inhabitants and animals completely wiped out. No trace was to be left that there was once life and people and a thriving culture in that country. To leave it just as if it had never existed before.

Try to imagine the scope of that commandment. Imagine the horror of parents being butchered as their children watch. Envision parents having to watch their own children being slaughtered. Animals being chopped up for no reason. Solders laying waste to a country, completely obliterating a race of people. The senseless horror of this scene is unimaginable. Yet, crimes like these are advocated in a book that is supposedly "holy".

Because dictators and authoritarians have committed similar crimes in pursuit of their political agendas, many countries have banded together and taken measures to make actions like these illegal under international law. Most notably are the Geneva Conventions, which, among other things, made genocide and crimes against humanity prosecutable. By those standards, the types of killings mentioned in First Samuel chapter 15 no doubt would be considered genocide, war crimes, and crimes against humanity.

Even during our most barbaric and uncivilized moments, senseless people have enough sense to know that genocide and infanticide is a line that should never be crossed, even during war. But, in the bible, there isn't a line that won't be crossed. Genocide, infanticide, rape...this is all fair game if you don't agree with the beliefs of the bible writers. If you're different, then this is what's in store for you. And if you have pets and livestock, well, they're doomed, too. This is the overall message of the old testament. And this is just one of many other examples.

After considering just one sample of Old Testament barbarity, how is it that a book such as this is put on a pedestal and held in such high regard by so many people? Books like the bible find ways to justify mass murder, and people follow along, to the point of becoming desensitized when they read grisly passages like these. But, as far as I'm concerned, the Old Testament should be shelved alongside Hitler's Mein Kampf and any other deplorable piece of propaganda that incites people to hatred and violence. We are better than that.